I must admit I have always thought of raclette as something very much belonging to the seventies. Most things tend to go in circles, at least what’s fashionable or not, and it seems like raclette is on its way back on to the dining tables. It’s a fine thing and it is a very social meal. Especially these days when we have hit november, it’s dark outside, the autumn has sort of ended but it is not really winter yet. November is something in-between, at least at the latitude I live. I was also inspired by a request from one of my followers to make one of my Thursday streaming one about raclette, I asked my cheese distributor if they had some. They did and off I went to purchase one. I love cheese and have not had raclette for more than 20 years i am sure, so I am really excited about this.

When I say raclette you might think of these round irons or perhaps they technically are grills as well, that you put on the table in the midle and everyone around the table have their own «scoop» or spoon that they fill with cheese and put underneath to melt. No, this is different as you can se from the picture above. There is a grill element underneath the horizontal arm melting the cheese and then you scrape it off on to a plate filled with whatever you fancy to go with raclette.

As it is I am about to make a video how this works. I am so looking forward to inaugurate my grill. You can check out that later. The fine thing is you can use up to a half wheel, depending on the size of the cheese of course. That will definitely impress your guests. So where does this raclette tradition hail from? Some say Switzerland while others say France. I think most people think of Switzerland when raclette is on the agenda, but it might actually just as well be from France. My cheese in the picture is French. And it is a French word. 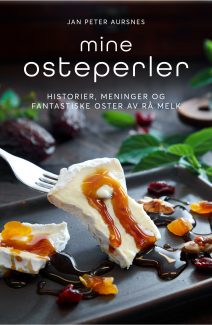