I think I’ll share a few Tasteful moments here, related to food and drink in general and cheese specificly. 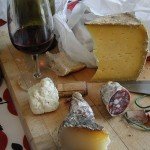 I have travelled a bit around and experienced a few things. Not that I am going to bother you with all that, but those taseful moments I am more than happy to share. I am very much into taste, and some of these moments were quite unexpected to put it mildly. Best like that. You can also share your tasteful moments if you like; I only want cheese to be part of it. I’ll kick it off though, and here are some of mine.

Perhaps one of my first golden moment from the cheese world happened many years ago in the small French town of Cap d’Adge. Stayed near by in the pearl of Collioure, but went to Cap d’Adge to play a round of golf in the morning. Afterwards we could do with a bit of lunch as we were rather hungry and walked into the club house bar to order some food. However, we were past lunch time. So the barman put his face in deep folds and announced that it was unfortunately not possible. Huge disappointment. Could have a beer though. Beer is not one of my favorites, but after a hot morning at the golf course, so I do not say No. But when he came over with beers he said: Mais, peutêtre; un moment! – Whereaas he five minutes later returned with a huge, fresh, golden and crisp baguette and a complete wheel of AOC Brie under his arm.

Divides the baguette in two and then in the middle. Divides the cheese in two as well and cuts lone slices of cheese that he puts in the baguette. Just that. No more. Plate and paper napkin. Voila!

Fresk baguettes like only the French can bake and a perfectly ripe Brie served at room temperature. And a beer.

I duly understand that the cheese Sulguni can be a little weird for most people. The chance you’ve tasted it is relatively small, as is the possibility you are ever going to. The real one at least. However, Georgia is a wonderful country. God’s own actually, according to the legend at least. I’ve stayed there and have many wonderful memories.

Tbilis was our base, where we lived and where we worked. Our grocery came from the city’s main market as ordinary supermarkets, to the extent they existed had a very lean selection of foods.

At the market we bought mostly fruits and vegetables, and cheese. Sulguni. Coming in a few varieties, from quite moist to rather dry and smoked. Buying cheese is a journey in itself, from booth to booth to taste. The reason for this is another aspect of this cheese. It comes as fairly normally salted, salty and insanely salty, long beyond most people’s imagination. Therefore we walked around the market to find the cheese that was just salt.

Then back to the city center to find a bakery. They are found everywhere in the city, only to go by the smell. Look for small basement windows half a meter above the sidewalk. Just stick your hand into the window with a couple of Lari and you have a bread in return. Freshly baked and hot. Comes in two varieties, round and oblong. So with a cheese and a loaf of bread, a bottle of Georgian wine or a beer, fins a park or a bench to enjoy the meal.
have tasted the is cheese at home as well, but part of the charm is to be in Tbilisi. TYhe day we return there this is one of the first things we will do. Bread and cheese, and a bottle of Georgian wine.

The wine society I am a member of on tour in the Veneto region. We anchored up at Villa Monteleone, a little quality manufacturer that is “wall to wall” with Masi. The mother in full swing in the kitchen. The son of the house who normally works at Fiat and drives a BMW invites into an adjacent room where the bottles and glasses are lined up. It’s Saturday morning, the time is 10 o’clock and we are ready to taste Amarone.

Some of us, not all, but some of us probably thought it was a heavy start of the day, which probably must be due to any activities the night before. Enough about that.

Tasting goes on for a while, and then the old lady from the kitchen knocks at the door and enters with a huge chunk of Parmigiano Reggiano, and an appropriate knife. The focus changed quite abruptly from wine to cheese, then back again, part because it now was cheese and wine in a stunning combination. Amarone is a significant wine, Parmigiano Reggiano is a significant cheese. Together they lift each other up into a higher unity.

The mood lightened, chat and discussion intensifies. Rarely have Parmigiano Reggiano and Amarone made ​​so many happy during the morning.

So here you go, an excellent pairing a well.

This site uses Akismet to reduce spam. Learn how your comment data is processed.

Thanks a lot for visiting OSTEPERLER. It’s all about raw milk cheeses, flavours, aromas, facts and fun facts. Please do navigate the site and you might just become a little bit cheese wiser.

Vacherin Vaudois. A soft Swiss raw milk cheese from Laiterie Daniel Conod in the Vaud canton of Switzerland.  Very creamy and it has two thin stripes of ash in the middle.  Colour is off-white. Washed rind in Reblochon-style. A spruce belt around the cheese keeps it all together. Very runny after a short while on your kitchen counter.  Aroma moderate, favour is mild with milk tones and vegetarian hints from the ash and “sangle d’épicéa”